Ai Editorial: When mobile pages load fast, users are likely to stay on a travel site for a longer period. Ai’s Ritesh Gupta takes a look at how travel search site Wego.com is counting on Accelerated Mobile Pages or AMP to deliver on this count.

Fast loading of a site, quick browsing, express checkout…speed is an integral part of digital commerce. All of this needs to be delivered diligently on mobile, otherwise travel e-commerce brands are going to suffer. If any session is time-consuming, users don’t stay on a travel site and drop-off.

Airlines need to look at areas like what shoots up the probability of a mobile site visitor bouncing off depending upon the page load time or how compressing of images and text can improve the performance.

In this context, the progress made by Google’s open source initiative called Accelerated Mobile Pages (AMP) is coming to the fore.

Before we delve into the efficacy of AMP, it is clear that Google’s prowess isn’t just about few tools. For instance, one timely notification about your trip – about pricing, destination content, flight itinerary etc. – is enough to keep on using Google.

Concerns have been raised about Google’s rising dominance. In case of AMP, it has been pointed out that the power of the web lies in its decentralization and AMP should be rejected. In a sector-specific issue, airlines have been cautioned against collaborating with Google for initiatives like booking within Google’s domain or not provide any critical data that makes Google even more powerful. But it all boils down to who is serving user the best, and if Google can in any stage of the booking funnel, then brands tend to go with the flow.

So how AMP is delivering? Why it is important?

In a recent AMP conference, travel search specialist Wego shared its journey of mobile web development, and how AMP solves issues related to speed. Page-load speeds came down from more than 11 seconds to less than one second. AMP pages are stored in Google’s cache servers and load in milliseconds.

First the team explained mobile web is indispensable in certain markets, where users struggle to download or retain the company’s app.

Singapore-based Honey Mittal, SVP, Product at Wego.com underlined that in its key markets (biggest market is the Middle East, followed by Southeast Asia, India and North Asia), the team has experienced the best and the worst of the mobile world (operating in 52 countries). “70% of users come from mobile (combination of app and web), and in certain markets like India and Indonesia this can go up to 90% as well,” said Mittal. He said markets like Singapore, the UAE, Taiwan Malaysia and Hong Kong feature users with high-end mobile devices, and stand out for their respective mobile networks. At the same time, there is also a big chunk of users using relatively cheaper or low-end devices (with price as low as US$50) and some of the worst mobile networks in the world. The team brings down the size of the app to 10-20 MB even while supporting 38 languages. Challenges in emerging markets include:

-       Jostling for space in a handset with 500MB storage capacity and not making the cut due to preference given to daily apps or other areas like photos, videos etc. being preferred over a travel app.

-       Another hurdle is slow network, say 2G, which eventually results in abandonment despite optimization of the size of the app and supporting multiple APKs (different APKs for an application are each targeted to different device configurations, Google Play allows one to publish multiple APKs under the same application listing).  So reacquiring this user is an additional cost for the company.

So mobile web plays a key role in such markets and also where Google Play isn’t popular or even blocked.

Then Mittal went on to explain the mobile user journey.

He referred to the core web app experience – comparing, zeroing down after filtering and sorting, and then the user is ready to be diverted to a partner site.

Acquisition happens on static landing pages, called airline pages or airfare pages – featuring different combinations like city to city, city to country that cater to search queries like cheap flights from one place to another. These objective pages with information about historic prices, destination-related content etc. entice the user to do a live search on web app and eventually directed to a partner site for a conversion.

Issues with this flow – load time associated with static pages, so the marketing expenditure incurred on links wasn’t yielding best results. It used to take 10-15 seconds for a page to download. And even if landing page used to open, conversion rate wasn’t up to the mark as there were issues with web app experience, too. This was proving to be inferior to Wego’s native app experience. “It was a responsive site, but not fully optimized for mobile,” shared Mittal, explaining that same code base as worked out for the desktop site, and also the same set of APIs were used for mobile as well. So designs weren’t tailor-made for mobile users. Also, as can be the case with an e-commerce site facing problem of too many trackers for attribution – tends to slow down a mobile site’s performance.

What Wego chose to do

Wego not only decided to go for the launch of AMP pages but chose to re-visit the entire flow in the second half of the last year. Wego opted to set up a PWA as well as specific APIs for mobile plus one source of tracker for being the single source of truth (enable all tracking on the server side). AMP pages were set up for popular static pages.

The team chose to make AMP pages, and since these pages were also catering to desktop users, the team wasn’t sure of what to do with AMP for desktop users, so older pages were also there as the chronicle versions in conjunction with the AMP pages designed for popular static pages. Also, the plan was to make smooth transition from AMP pages to PWA (engage users initially via AMP pages and PWA would help users compare travel deals before completing bookings)  – the team used the AMP install service worker, for initiating PWA in the background.

There were important gains in terms of page load speed time.

In terms of limitations, he explained: A user is required to do a search, so certain pieces of information are required - departure city, destination, dates, so users are provided with text box search and auto-complete option. For example, if a user types “LON” for flight search, one would expect options related to London (Heathrow, Gatwick, Luton etc.) AMP didn’t support that. Mittal also referred to calendars being an intricate part. Since Wego operations in the Middle East region, too, there is a need to support various calendars for different languages like Persian, Arabic etc. (calendars like Hijri and Shamsi are needed to be displayed in addition to Gregorian). Displaying weekends, public holidays, school holidays etc. is also important as users check on them while planning a holiday. Weekend is different, say Friday and Saturday in the Arab countries, Thursday and Friday in Iran. “There were gains in terms of speed, but certain areas of comprises in the user experience arena based on form filling criteria. So the team chose to do testing of form filling on PWA and assess if “gains outweighed the losses”. 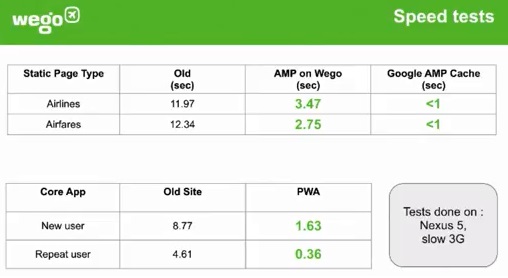 -       Initiation of transition from AMP to PWA

-       App-like experience on PWA – users acquired from Google, reach on AMP pages (user can enter dates, say for hotels or call to action) to moving onto PWA and live search results in live results.

As for paid marketing results, Mittal shared that early results showed CPC and CPA going down by 10-19%.

Google is already planning to bring the speed and performance of AMP to advertising, and advertisers are  now looking at the speed of AMP for their paid campaigns in AdWords.